"Good old Days" in the Old Towne Mall
Since I noticed that so many visitors come here searching for my Old Towne Mall post, I thought I would share another view of the mall. You can see the Carousel gift shop on the left. What a wonderful place this mall was. Forget that the shops began as independent, local, and unique places, and that Children, Parents, and Grandparents could all enjoy Old Towne together. What made Old Towne so memorable was atmosphere, atmosphere, atmosphere! Check out "the west's slowest cable car" in the background (called so because it didn't move). I am not sure if it was a real car, or a replica, but it was supposed to be from the Powell and Market Streets line in San Francisco, and found its way to Torrance somehow. People could sit in it and just enjoy the ambiance of the late great Old Towne Mall!
Tags: Old Towne Mall Torrance California 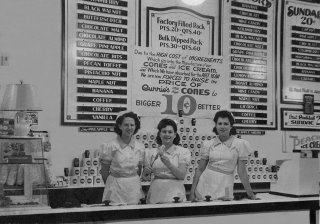 I'm sure you all have heard the story of how Lana Turner was discovered sitting at the counter at Schwab's drug store. How many aspiring starlets rushed over there hoping to be discovered too? Well, as most myths go, there was an element of truth to it. Depending on who you believe, she was actually discovered at either Top Hat Cafe, or Currie's Ice Cream Parlor. This photograph shows what the interior of a Currie's looked like. These three lovely ladies are ready and willing to prepare a "Mile High" ice cream cone for their loyal patrons.

I have a personal connection to this photograph, being that the woman in the middle is my Grandmother. She has kept this picture on the mirror in her bedroom for years, and it always made me smile when I saw it. Growing up with Thrifty ice cream in what are now Rite Aid Drug Stores, I did not have the same grand ice cream parlor experience that past generations had. Unfortunately, Currie's Ice Cream Parlors are long gone and the large scale Parlors are a thing of the past. Sure, there is the Gibson Girl Parlour at Disneyland, but as far as I know that is about it here in Southern California. What I enjoy about the picture is how well stocked, open, and clean the place was. The uniforms are nice and more professional than you'll find today. You're lucky if you see employees wear matching Polo shirts with the company logo on them. But one thing that has not changed is the continuing rising prices. Notice the sign apologizing for the price increase. Wow, ten cents for a cone! Outrageous!
Tags: Currie's Ice Cream Parlor Lana Turner 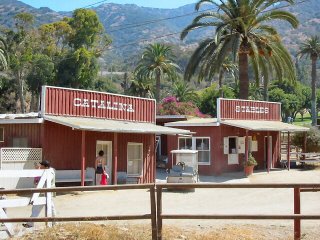 Catalina Island, although no longer in its heyday, still provides Southern California residents with a wonderfully quaint get away spot. Spend a day, weekend, or a whole week on the island and experience everything from a bicycle ride to a submarine voyage. With its blend of old and new, Catalina Island has something for everyone. 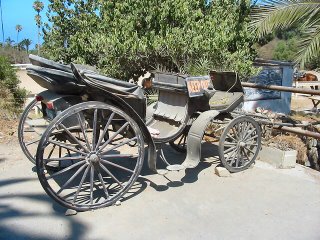 These photographs were taken of the Catalina Stables, a business that offers horseback riding excursions into the wilderness of the island. The old west theme of the buildings, along with the artifacts around them gave the feeling of being in another time and place (even if not completely authentic). I highly recommend a trip to Catalina for anyone wanting to escape for a couple of days. The sign on the carriage says "Keep Out" instead of "Keep Off". 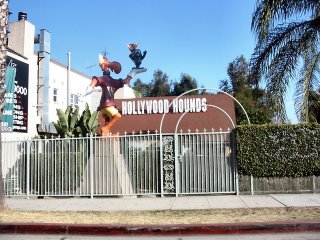 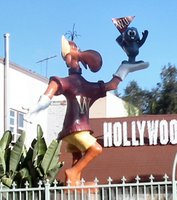 This summer I had the opportunity to finally see this local landmark. I love painted statues, especially of animals, and any other fantastical elements. Not that I am a fan of the Rocky and Bullwinkle show, but the show's popularity and the character's influence is significant. 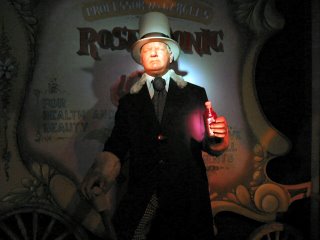 W.C. Fields, a movie icon, is shown here from the 1936 movie Poppy. Like the Charlie Chaplin set, this scene amazes the visitor through the use of lighting. The detail of the wax figure is incredible. I half expected this figure begin moving because of how realistic it looks. 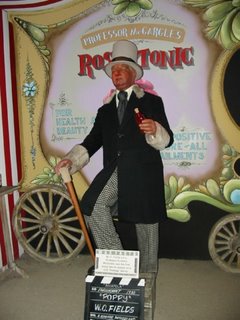 A lighted photo shows the detail of the set. Not just a painted backdrop, but wagon wheels also add to the feel of the display. 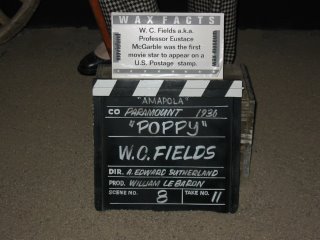 This clapboard sign and the wax facts give information about the actor and movie. Quite an honor to be on a postage stamp! 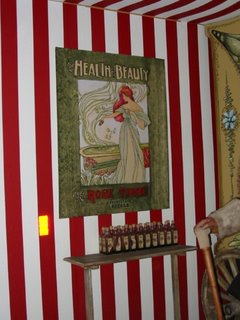 The left side of the display. 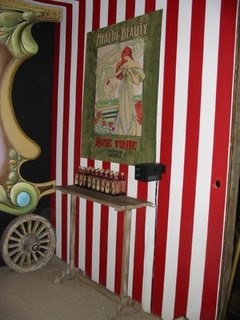 The right side of the display.

At the Movieland Wax Museum auction the set took in $400. Pretty inexpensive if you ask me. Lighting was what made this set so cool, not because of a large amount of set pieces. I am not sure what became of the figure. Like the Mae West figure, they switched the real figure for a different one for the auction. It looked far less realistic than this one. It sold for a pretty hefty $2,350. The wax museum at Fisherman's Wharf already had a W.C. Fields figure, so they either kept this one as a spare or it went to the Korean Wax exhibit. The Hollywood Wax Museum has a very similar figure also.

Many of the figures moved to a sister wax museum at fisherman's wharf in San Francisco. Find out which figures moved by visiting the Wax Museum's website here.

Posted at 11:33 AM Category: Movieland Wax Museum
Email ThisBlogThis!Share to TwitterShare to FacebookShare to Pinterest
0 comments 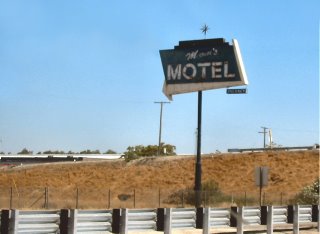 Today's focus is back on the cool signage on the 99. Mom's Motel is another instance of the abandoned signs for places long deserted. There are several great examples along this stretch of highway, and some of the best signs have no building left for which they advertise. 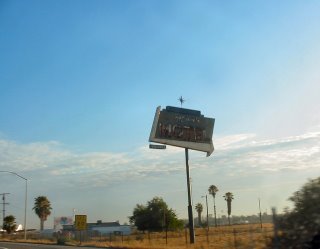 I wonder what will happen if I keep following the arrow. I suppose I'll end up on someone's farm. There is vacancy, so I might spend the night. Actually, my two favorite elements of a good sign are stars and arrows. This sign has them both. A sign like this is designed to attract people to the business, and many places today do not utilize this concept. Maybe it does not work any more, maybe business owners are not bold enough to invest their time and money in something they don't think is important. 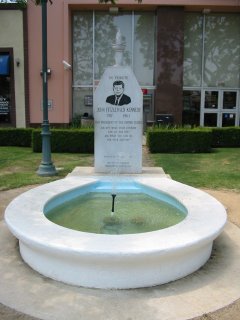 I don't know who decided to create a memorial to John F. Kennedy shaped like a giant toilet bowl, but despite that misstep it still looks cool. I like how they painted the inside a healthy light blue. This memorial usually had a type of blue chemical additive in the water that really made it look like a toilet bowl, but here the water just looks dirty. Although it may seem easy to critique this little park, it does have a nice small town charm in the heart of old Torrance. 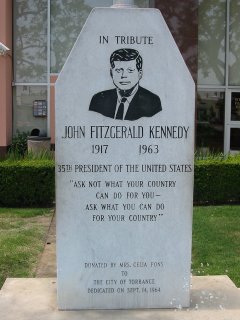 This close up shows an obscure quote from our thirty-fifth president. The giant tombstone is actually creates a solemn mood with its simplistic attitude towards the memorial. For many of us who would not be born for a long time after the assassination, Kennedy's assassination seems like ancient history. But for many it marked a definite change in their attitude of the country and their optimism for its future. 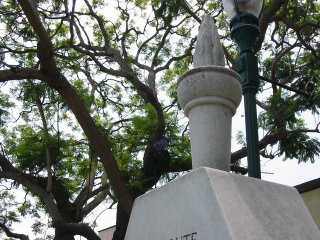 Here is a close up the cement flame on top of the memorial. Very nice.

The memorial is located on the corner of Sartori and Cabrillo Avenues in Torrance Ca. 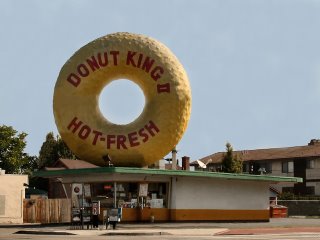 Hot, fresh, and made daily. Donut king II, (and its previous incarnations in this building) has had a long tradition of serving up doughnuts and coffee to hungry southlanders. Located on the North-East corner of the Western and Marine avenue intersection, this wonderfully Googie structure has not shared the success and popularity of her more famous cousin, Randy's Donuts. Actually, Big doughnuts have been a common theme among California's roadside vernacular architecture. Built as part of the Big Donut Drive in chain, Donut King has had at least five other sister locations during its lifetime. There was a time when I was a kid that my dad visited this place so much that they had his usual order ready for him when they saw his car drive up the street. (This photo has been altered to remove the power lines that criss cross in front of the building, probably one reason why movies and commercials film at Randys instead)

The remaining former Big Donut Drive in locations are: 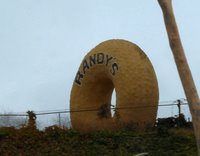 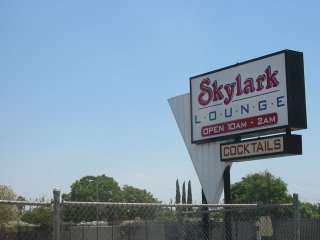 During my brief trip through Bakersfield I came across a few places I had not expected. As I was stopped at an intersection, I saw this Nightclub place surrounded by fencing. The sign here, seems a little 80's to me, but I have no idea when it was made. Bakersfield was such an interesting city. A mix of old and new made it pretty unique, and the oil fields a quite a sight to see! 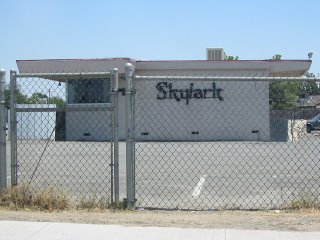 This is the building. I don't know if it is being remodeled, or demolished. There are cars in the parking lot, but that gives me no information. Heck, maybe it's supposed

to have a fence around it for all I know. What struck me about this place was the cool lettering on the building. I bet it's older than the 80's sign. Anyway, if I had more time, I would have tried to get pictures of all the cool buildings in Bakersfield. I don't have the opportunity to get up there very often. 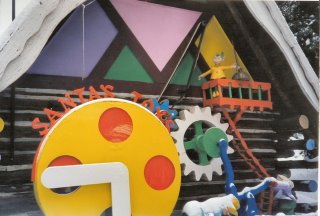 Inspired by some pictures shared on the Stuff From the Park blog, I thought I would share a couple of the photos I took during the last two weekends of Santa's Village in Lake Arrowhead. We had a late snow season, which made the trip more fun, but made taking photos more difficult. The Magic Train Ride was covered in so much snow that one could barely see the Little Miss Muffet statue, or the three men in a tub. The last weekend the park was open, early March 1998, had slightly better visibility. This photo shows the side of Santa's Toy Shop. Nice, simple details made this typically 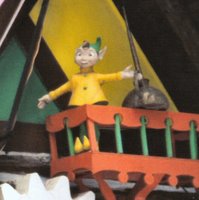 themed building so nice to look at. A close up of the elf here is an example of such a detail. I like how this guy's job is to keep Santa's toy shop's wheel spinning. Does anyone know just what is left? I live pretty far from Sky Forest and I would not want to take such a long drive to find out there is absolutely no ruins left to see. I know the props and rides were sold off, but I thought the buildings might have survived. Isn't there a Santa's Village amphitheater there now or something? I remember seeing a movie on the Family Channel later that year that was filmed at Santa's Village. It stared Gary Coleman and Harry Hamlin. It was called Like Father, Like Santa. 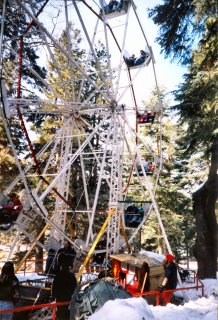 This photo is a perfect example of just how far Santa's Village fell. No more clean cut happy little elfs willing to help you onto Santa's lap. Instead we have some creepy carny looking

fellow taking a drag off his (hopefully) cigarette. You wouldn't ever see this at Disneyland. Although if they ever did have a cast member smoking while working policy they could pull the same "Walt had one" cop out they used when they changed their mustache policy. I should go around Disneyland offering cigarettes to cast members, and when they decline it, I'll just say "Come on, Walt had one" (Actually he had many). Anyway, doesn't this guy just ooze Christmas spirit! I went on the Bumblebee Monorail. I went on the Carousel. I went on the Bobsleds. I was too afraid to go on this Ferris Wheel!


View information on all of the Santa's Village theme parks here.