Knott's Berry Farm- Before and After Part 1

It had been a while since I went to Knotts berry Farm. I knew that many of the thematic elements which made it such a special place were removed to make room for roller coasters. During my recent trip I tried to compare old photographs of Knotts to what remains left. Some places were completely gone, and I could not do any comparisons. But I was able to do a few. So here is the first in a series of before and after pictures of Knotts Berry Farm. 1970s
This shot shows the Timber Mountain Log Ride in the late seventies. The ride is often called the best log ride in the country. Out of how many I don't know. It opened in 1969 and has remained a park favorite. The good thing about this shot is how much you see. The theming and overall experience rivals even the best attractions from Disney theme parks. Well, maybe not the Haunted Mansion or Pirates of the Caribbean. 2006
This similar shot shows that not much has changed to the exterior of the attraction itself. The biggest difference is the growth of the trees. Unfortunately, they cover up so much of the mountain that it makes taking these comparison pictures difficult. Another difference is the view of the rides behind the mountain. On the left is xcelerator, and directly behind Timber Mountain is Supreme Scream. They really take away from the Ghost Town feel of the area. But to be fair, so did the parachute ride and sky cabin when they opened in 1976. I was reading how they finally approved the redevelopment of the former Movieland Wax Museum location. It makes me sad, but hopefully, since the new project will pay tribute to the museum, not everything will be lost. I just hope they keep the terrific sign outside the building.

This Movieland Wax Museum scene is from the Stan Laurel (1890-1965) and Oliver Hardy (1892-1957) film The Perfect Day. Next to them is Edgar Kennedy (1890-1948). The picture is a typical Laurel and Hardy film. They try to have a relaxing outing, but nothing goes according to plan and hilarity ensues. I've scene the picture, and I don't remember it having the car crash into a theatre. Although it has been years since I've watched it. With good lighting the figures look incredibly lifelike. A close up of Laurel and Hardy. When the auction was held, two different figures were sold off in place of these two "original" figures. They took in $10,000! Not bad for replacement figures. They Keystone cop that somehow does not pay attention to the car accident next to him. I do not know if he had always been part of the set. An old postcard I have does not show him in the scene. This figure sold for $1,500.

A close up of the figure shows his badge as Movieland Security Walter 2. He may be a tribute to the live Keystone cops the museum once had. They would pretend to be wax figures, then move and startle visitors. They also would perform magic tricks for guests. The clapboard which shows information on the film. Laurel and Hardy are a popular choice for wax museum characters. The Edgar Kennedy figure sold at auction for $550. The Model Tee sold for $3,750. While the set sold for $1,500. Such a sad look for such a momentous occasion. The child here, who has a striking resemblance to a certain Wax Museum blogger, does not seem to be enjoying his visit with Santa. Well, maybe in future years he will find more pleasure in his trips to see jolly old Saint Nick. Although, this Chris Kringle looks a little shady with his evil eyes.

The Peopletron Focus would like to wish everyone a very Merry Christmas!

Posted at 12:33 AM Category: Miscellaneous
Email ThisBlogThis!Share to TwitterShare to FacebookShare to Pinterest
0 comments Just a few more shots of the memorial to end this series. This fountain was off during my trip. It would have been nice to see the water coming out of the lion's mouth (If that's what it does). Again, nice tile work. This is the back of the courtyard at the top of the memorial. As you can see, the structure really looks like an ancient temple. It hardly seems like Southern California. One final view of the memorial. This is a must see when visiting Santa Catalina Island. Don't miss the Casino building either. Today's focus is on the tower of the memorial. This is the coolest section of the structure, as it has the most complex design features. The tile work is just superb. A rather dizzying view of the ceiling. This shot is taken directly in the middle of the tower. Catalina tile is just so beautiful. I am glad that they have maintained this building for all to see. This is a shot of the ceiling from the side. It shows more of the marble and stone work that makes this place so unique. For only five or so dollars, you can spend as much time in the memorial and gardens as you'd like (At least during operating hours).

Posted at 1:33 AM Category: Architecture, Catalina
Email ThisBlogThis!Share to TwitterShare to FacebookShare to Pinterest
0 comments Here is a close up of one of the Gargoyles alone the wall of the Wrigley Memorial. The memorial has several of these figures, and they create a dramatic element to the temple like features of the building. A shot of a bronze door in the memorial. It gives the impression of being in an old castle A close up of the sign next to the door. Here is a section of wall with marble and geometric shapes. It is really cool to stand there looking at the various patterns of marble and tile. A sign with a little more information on the memorial. The Wrigley Memorial, completed in 1934, stands high in the hills of Santa Catalina island. On the outskirts of Avalon, the structure is part of the island's botanical gardens. It looks like a massive temple, but in reality is a lookout point that houses a great view of the sky, ocean and hills. This is the view from the top of the memorial. The gardens and memorial are fairly isolated from the rest of Avalon. A close up of the stairs leading up to the top. Here's a shot of the Western Exterminator Company sign that's right off the 405 freeway in Long Beach California. Created in 1931, the "little man" with the mallet has remained a great advertising icon. According to the company, his name was originally Kernel Kleenup, but it did not stick. This poor quality shot shows a little more detail of the figure. He's actually quite large, as is the little rodent he's warning. I guess the spikes keep birds away. It would be a shame to have an exterminator's mascot covered in waste from a "flying rodent". The little man can be found all over the place, from buildings to the company trucks. 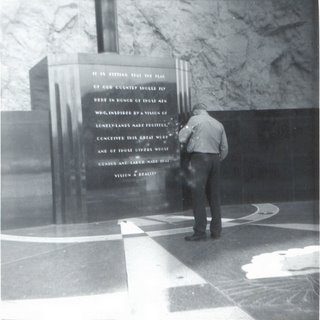 "It is fitting that the flag of our country should fly here in honor of those men who, inspired by a vision of lonely lands made fruitful, conceived this great work and of those others whose genius and labor made that vision a reality."

Today's focus is on some vintage photographs from Hoover Dam. This first shot is from the memorial plaque and flagpole. Although not visible in the picture, two giant winged statues are on both sides of the flagpole. Completed in 1936, the dam provides water and electricity for many cities, including Los Angeles. 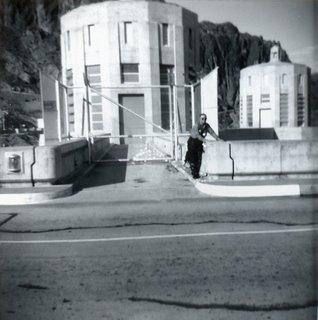 A shot of two of the four structures on either side of the reservoir. Currently over the door of the building there is a clock which shows Nevada time. On the other side of the dam a clock that shows Arizona time. This picture seems to date from before those clocks were added (Whenever that was). A giant bypass bridge is currently being built to accommodate traffic and security needs.